“ALADDIN” is a story that we all have grown up loving, of the boy who, through the course of his adventures and the fortuitous possession of the Genie in the Lamp, sees him literally transform from the petty thieving “street rat” to the impressive “Prince Ali”. Set in the streets of the fabled city of Agrabah, where this mystical land of magic and sands is more than it seems and has a fascinating appeal. The Animated movie, which premiered in 1992, was a mega hit that instantly connected with audiences and, 2019 also saw the Live Action Film gross a whopping One Billion Dollars through a very creative transition. The sensational animated musical transitioned to Broadway in 2011, winning multiple awards and wowing audiences worldwide with its mesmerising stage performances and stagecraft.

A captivating storyline with its intricate plot twists and turns combined with award-winning music scores will assuredly capture everyone’s hearts. This mega-musical is being brought to the stage by nearly 250 students of Pathways School Noida. The phenomenal sets and props- all built in-house, together with brilliant acting, live singing and superlative choreography, and much, much more will “Magically” transport you to “A Whole New World”. So if you wish to be spellbound by the sheer brilliance of the production, then come and spend an evening with us at Pathways School Noida, and we assure - you will be left “Speechless”!!! 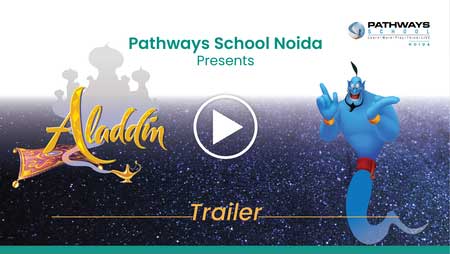