Tasher Desh' ('Land of Cards') is a dance drama written by Rabindranath Tagore in 1933. Dedicated to Netaji Subhash Chandra Bose, it takes a satirical look at tyranny and regimentation and celebrates freedom of speech, thoughts and deeds. In the story, a prince lives with his mother- the queen. Soudagor Putro (the merchant's son) is his only friend. Bored by their claustrophobic and monotonous existence in a dilapidated castle, the duo set on a voyage. The story unfolds when a prince and his trader friend happen to get lost in a storm and land on an island of cards. They find the citizens of this land extremely disciplined and regimented, who don't laugh, dance or express their desires for fear of breaking the law. The visiting prince, however, does what he wants, goes wherever he wants and expresses his likes or dislikes freely. This gives rise to curiosity among the existing citizens, even the King and the Queen. By observing the prince's ways, the women of the land of cards start a slow revolution, bending the rules to become happier, freer and more expressive.

Tasher Desh: Land of cards by Rabindranath Tagore is a very thought provoking and powerful play with very interesting themes suitable for young learners of PYP 4 and 5. The play opens discussions and deliberations on the ideas around ‘exploration’, ‘blind obedience’, ‘class and caste divide’, ‘trust and letting go’, ‘reform and rebellion’, ‘freedom’, ‘inclusivity and diversity’.
Students made several connections with these themes and articulated their thinking in words and illustrations.

We began the introduction to the play by learning more about the author. These sessions on Rabindranath Tagore’s life and his work were led by our librarians and Hindi teachers through Mr. Tagore’s poems and short stories. Students read the story Tasher Desh, wrote a book-review, and designed a cover page as per their imagination and interpretation.

As we engaged deeply with the play, the students began to make connections with the characters and their lives. While exploring the Prince’s life in a palace, which does not excite him despite all the luxury and comfort it offers, we also read a poem ‘Caged Bird’ by Maya Angelou. Students instantly saw the similarities in the way the Prince and the caged bird responded to their immediate environment and desired to break-free.

Land of cards is a political satire where the life of the citizens is governed by strict rules and where people are not allowed to question or follow their wish. We included Choice and free-will in our word study and reflected on where and when the characters exercise their free will and choice. Students also made a personal connection with the time when they exercised their free-will & choice against all odds.

This further led to a discussion on whether we would prefer a land with rules or a land without rules. Students engaged in a tug-of-war of ideas and expressed their opinions clearly and articulated how important it is to have a strong and sound reason while choosing either. Their expression of ‘freedom’ was captured through clay relief work where each child depicted their understanding of what ‘freedom and choice’ meant to them. Some of the powerful quotes and dialogues inspired our children to create designs using ICT for merchandise such as mugs and bags.

The students have started to internalize some of these ideas and continue to make pertinent connections with the text in the context of the times in which it was written. 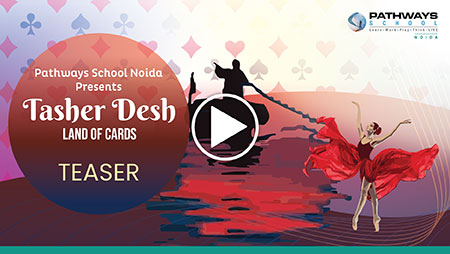