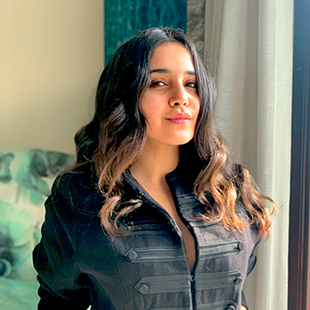 Graduated from Pathways in 2014, Astha went to study Honours in Interior Architecture from University of West of England, Bristol UK. Later, she followed her passion in styling and joined Istituto Marangoni, Milano to study a year of Intensive Fashion Styling and Photography.

While studying Astha interned with luxury fashion and interior houses in England and Italy to gain deeper understanding of the art and culture in this region. She also did brand management and fashion styling with a few fashion houses and organisations in India which included costume designing and image styling for the cast of a Hindi web series. Astha never left practising art, which she started with IB, and hosted an art exhibit in 2017 in association with the Helping Hands Foundation India.

Interning with start-ups gave her a good insight on new ventures and helped her when she decided to carry on the legacy of her father’s business of perfumes which were crafted in-house at their family-owned distilleries in North India. Her thought-process gave the business a new dimension and helped her design a sustainable ‘green perfumery’ in which the perfumes were distilled using the pure extract from herbs and spices available in India.

Astha has launched the new perfume in January 2020 under the brand name ‘NASO’.

Being an avid traveller Astha has understood and been inspired by various cultures which she aspires to amalgamate with the traditional values she has been brought up with. Despite being busy with new ideas and collaborations, Astha also wants to bring her knowledge of Bharatnatyam to a greater use and practice.

Her social media links are: https://www.nasoprofumi.com/pages/page-1